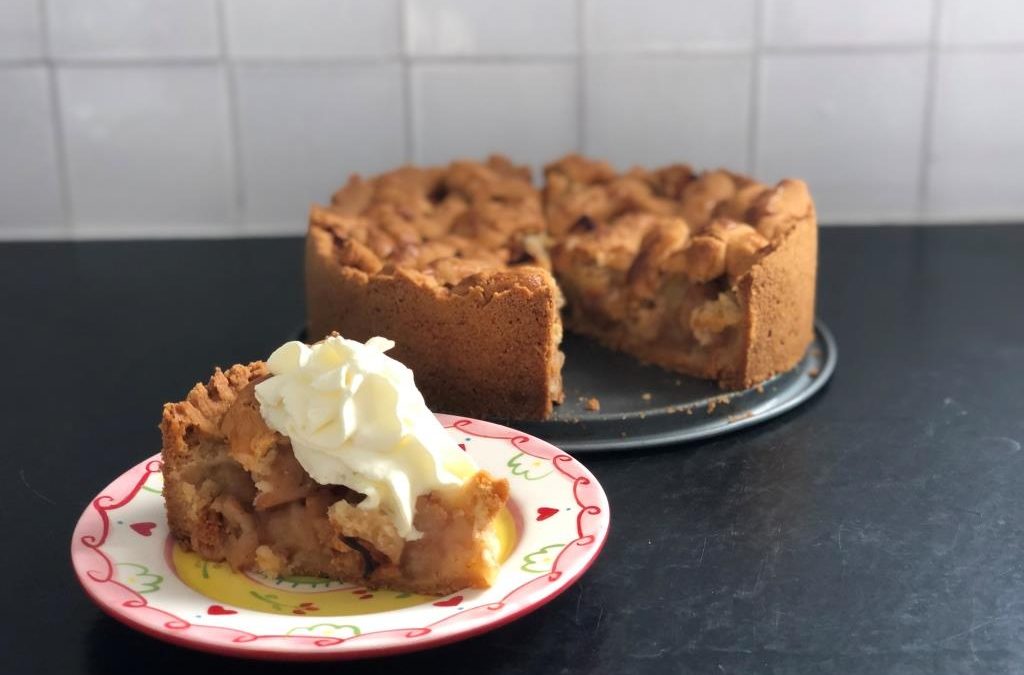 How to bake a Dutch Apple Pie?

When we spend a lot of time at home, we have time to pick up old hobbies or learn new things. When I was young I used to bake apple pies with my grandma all the time. But it’s been a long time since I’ve baked my last pie. Until this stay-at-home period. During these weeks at home I have baked several apple pies. Which gave me the idea to share the recipe with you, to bring the Netherlands into your homes.

Normally I use a package of the famous Dutch brand “Koopmans” to help me bake the perfect apple pie. But since this is only sold in the Netherlands I have now used a recipe which is easy to use wherever you are. So get some apples and start baking! And don’t forget to share your baking pictures with us, for example on Facebook. 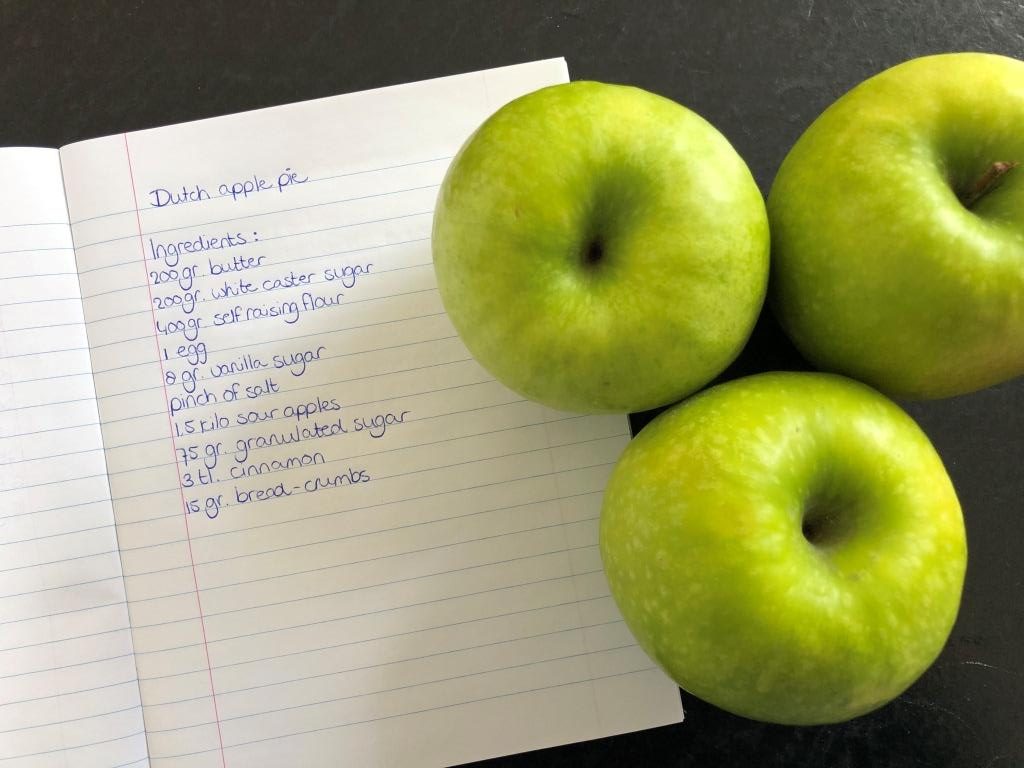 How to prepare your Dutch apple pie

Beat the egg and divide into two parts. One is for the dough, the other for brushing the pie before putting it in the oven.

Next, mix the butter, caster sugar, self-raising flour, half the egg, vanilla sugar and a pinch of salt into a firm dough. Use a mixer and knead with your hands at the end. Then divide the dough into 3 parts.

Now peel the apples and cut them into slices or cubes. Add the raisins (if you like, I didn’t add them because I don’t like them very much). Mix the apples with the granulated sugar and the cinnamon.

Use one part of dough to cover the bottom of the mold. Use a second part of the dough for the edges. (Option: sprinkle the breadcrumbs on the bottom. The breadcrumbs absorb the moisture from the apples)

Now put the apples in the form.

Use the last part of the dough to make the top of the apple pie. Carefully roll long strips and place them crosswise over the apples.

Place the pie in the oven, slightly below the center. Bake in 60-75 minutes at 170 degrees Celcius until the pie is golden-brown.

The apple pie is ready when it is golden brown and when you pierce it with a fork, it comes out dry.

Now comes the most difficult task. Let the pie cool for at least an hour. You can look at your pie, smell it but don’t touch it until it has cooled off. Then open the ring of the spring form, cut yourself a big slices, add some whiped cream and enjoy. Or as we say in Dutch; Eetsmakelijk en Geniet! 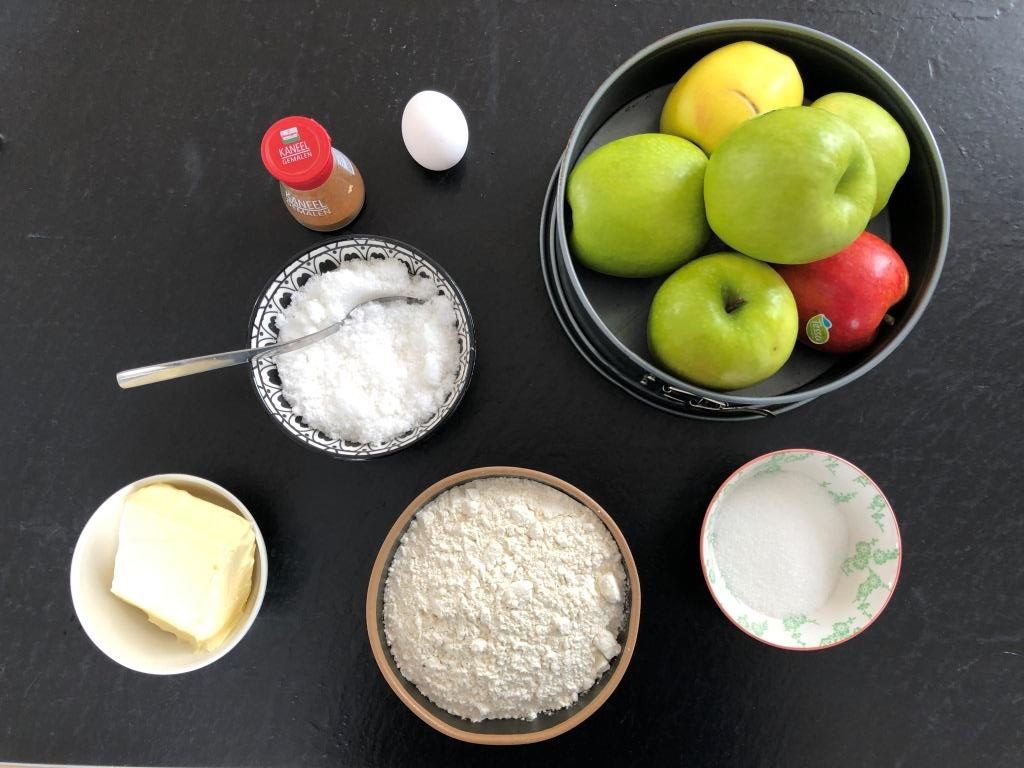 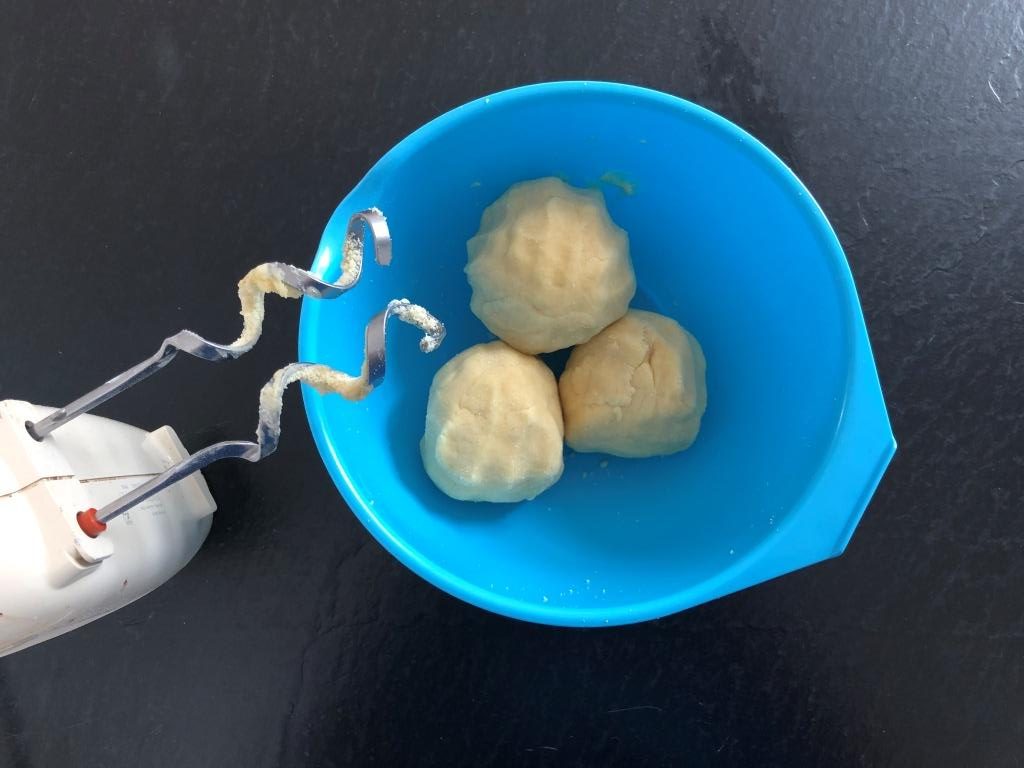 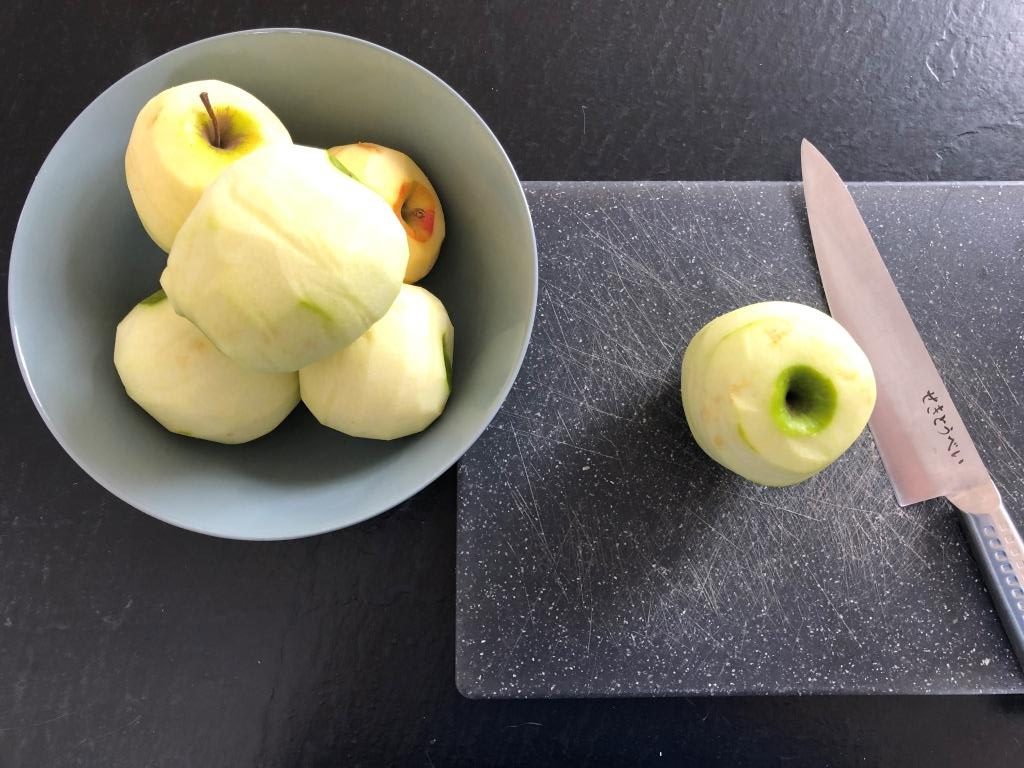 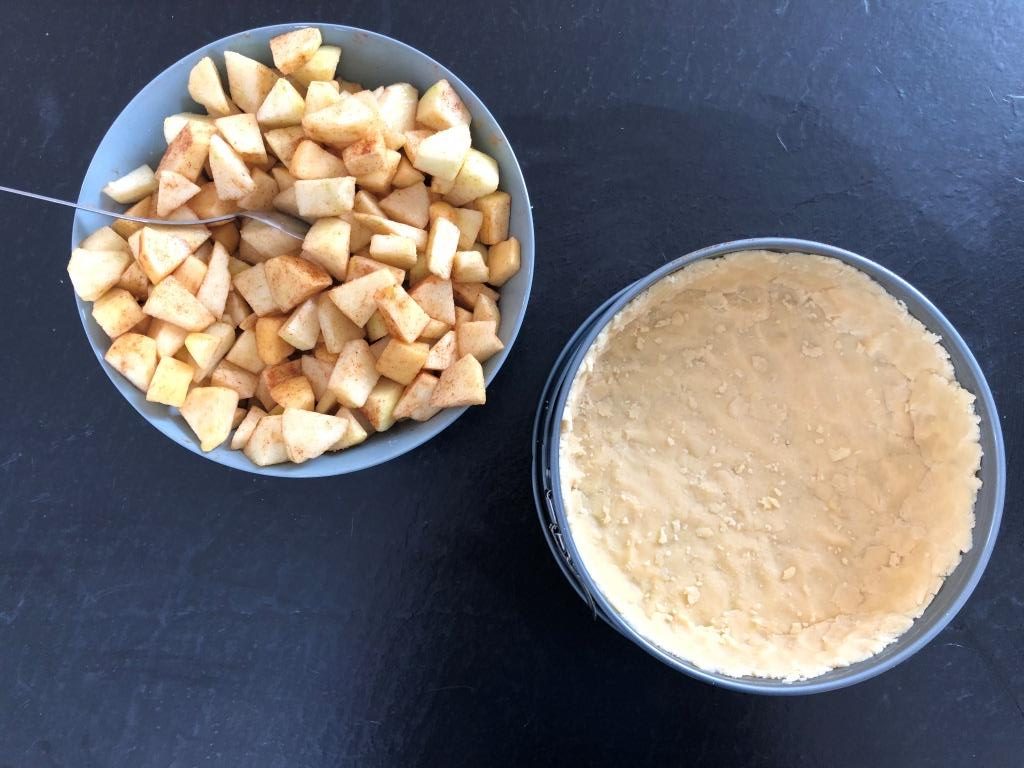 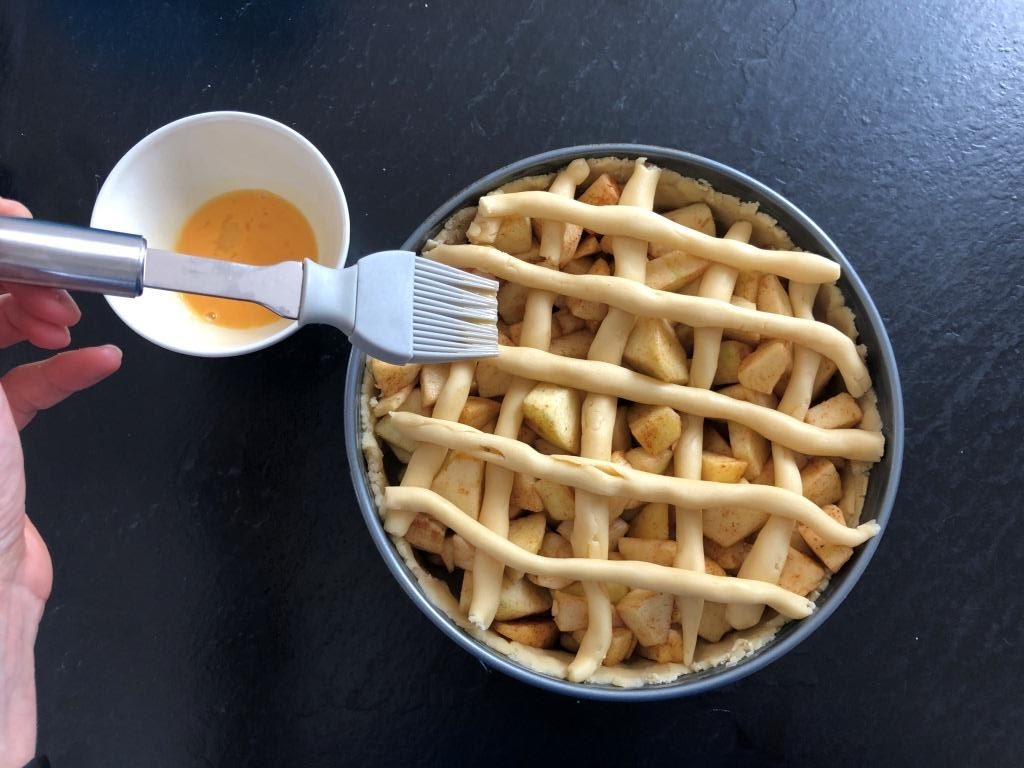 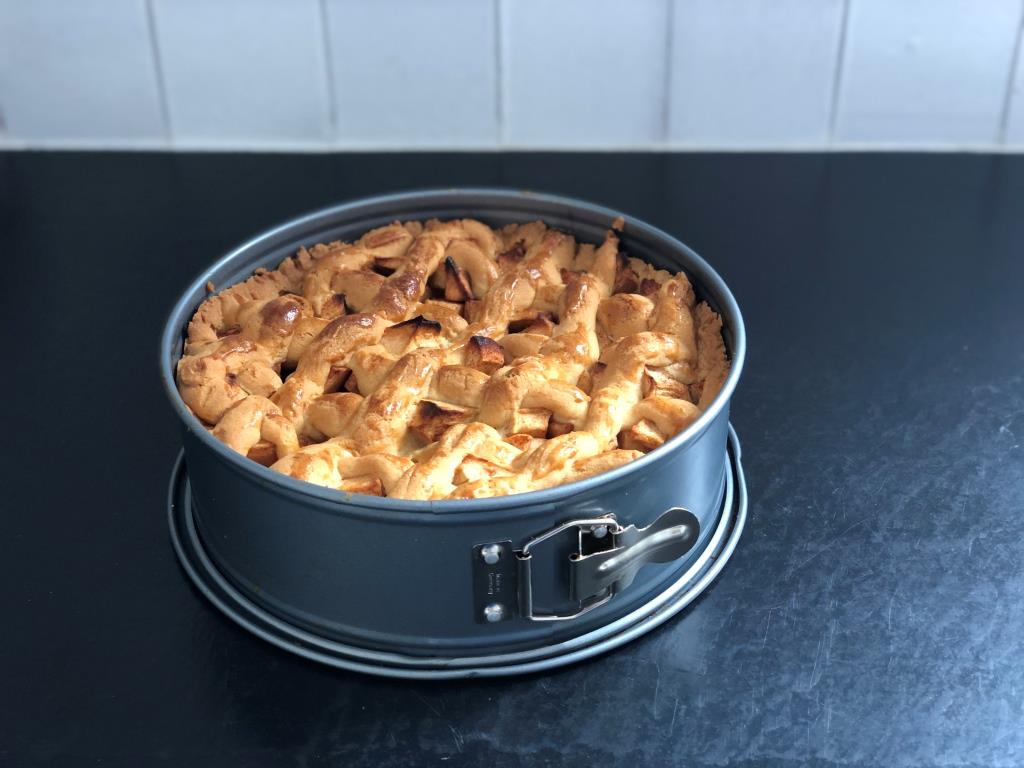 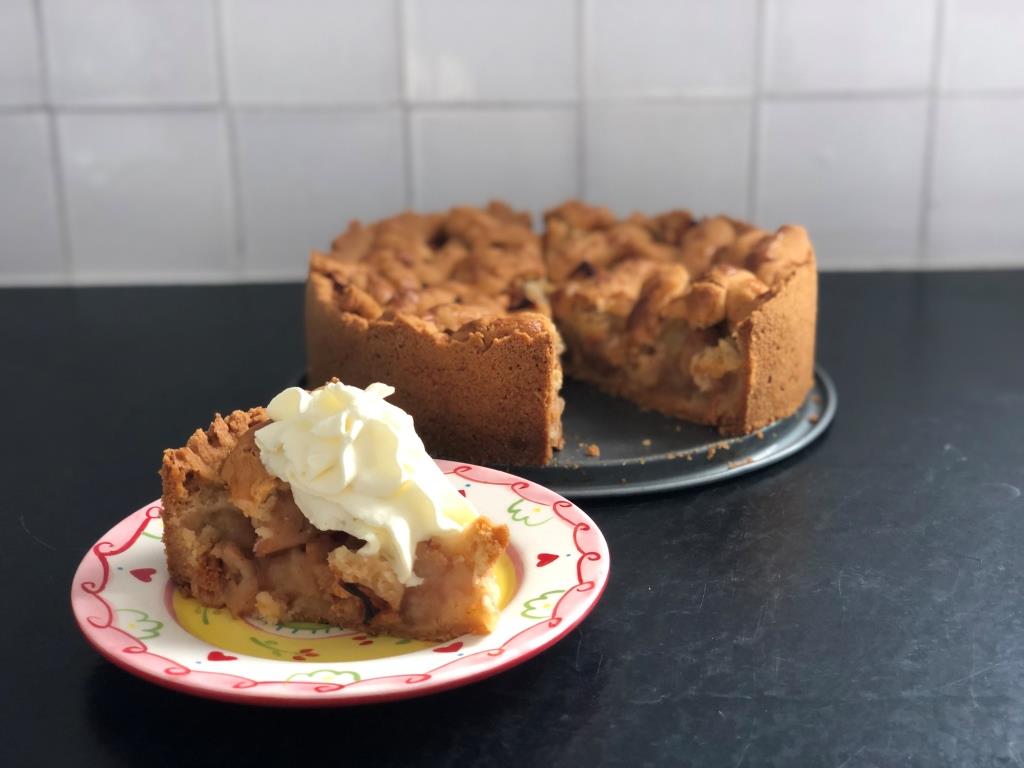