The history of windmills 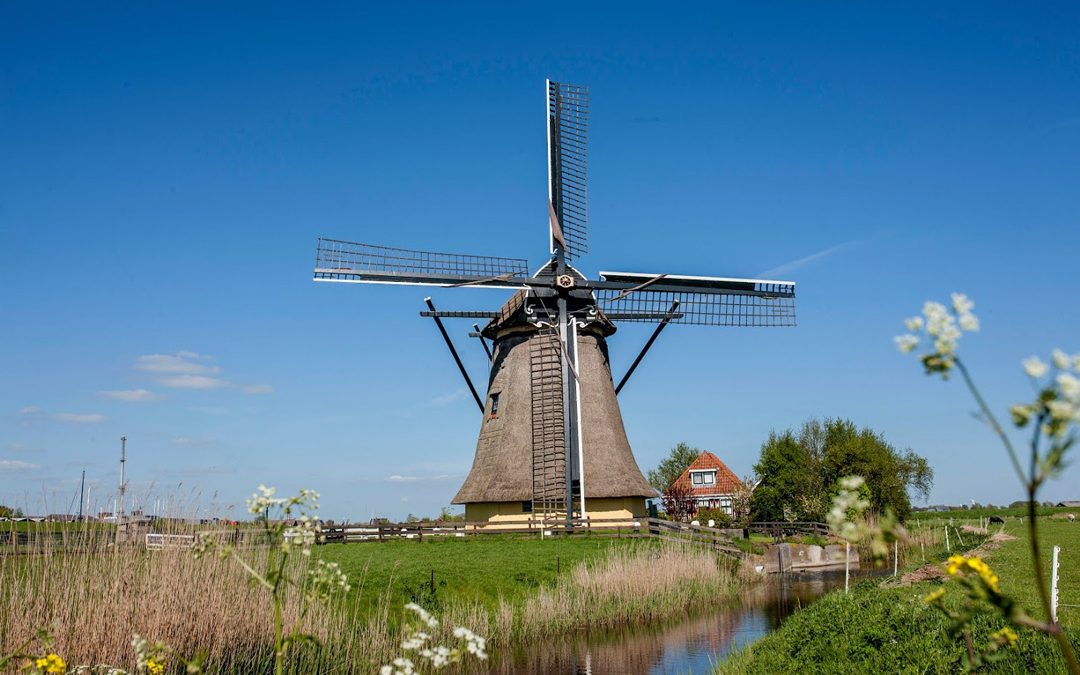 Windmills in the Netherlands.

For centuries windmills have been at the heart of daily life in the Netherlands. From the reclamation of land to the processing of raw materials and the manufacturing of products, windmills had many different purposes.

Today the Netherlands is still known for its windmills. But why? And how many of the thousands of windmills are left?

This weekend would have been National Windmills Weekend. Where windmills open their doors to visitors. Unfortunately this year all windmills need to keep their doors shut. Therefore we try to teach you a bit more about our windmills in today’s blog.

What is a windmill?

We all know what a windmill looks like. But how do you describe such an imposing appearance. To put it simply, a windmill is a structure that catches the wind using sails or blades. It operates a spinning system converting the power of the wind into energy. The energy generated can be used for various purposes. In addition to windmills, there are also other mills powered by water, people, animals or engines. But the most popular mills in the Netherlands are windmills.

The first windmills appeared in the Netherlands in the early days of the thirteenth century and was used first to crush grains.

Wind energy has been mastered for a long time. In 500-600AD the Persians were already building grain mills and water pumps powered by wind. The Persian windmills, however, have a vertical axis not adapting to the changes of wind, while the Dutch windmills have a horizontal axis following the wind. Therefore, it is not possible to establish a clear link between the two inventions. 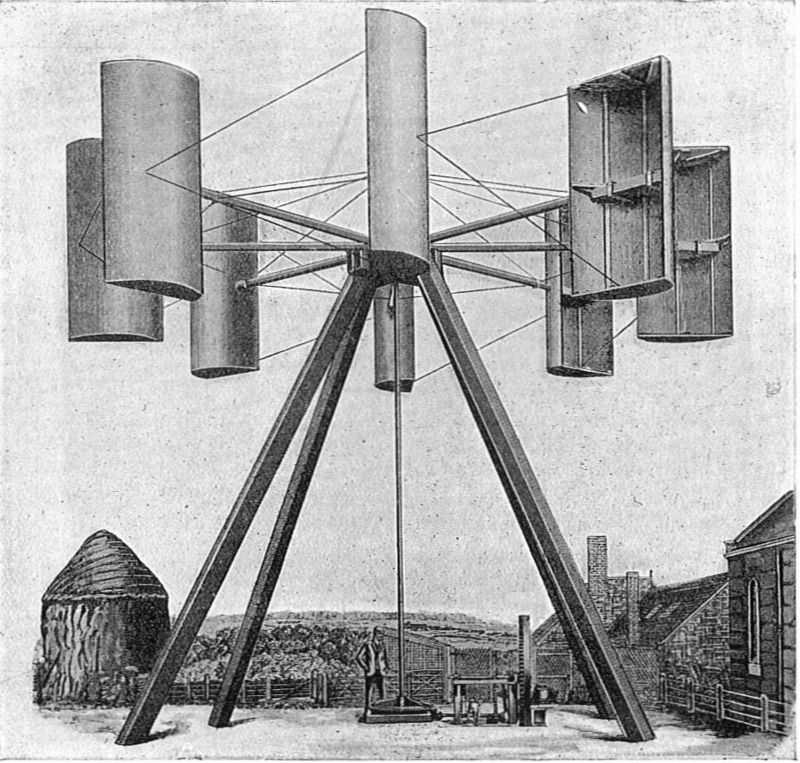 Example of a windmill with vertical axis, like a Persian windmill

What kind of windmills are there in the Netherlands?

The first type of European windmill is post-mill. They had a very specific structure because they were small and built on a tripod structure allowing them to turn the whole mill to bring the sails in the wind. Post-mills were the most frequently used type of windmills until the end of the 19th century when they were replaced by tower mills. 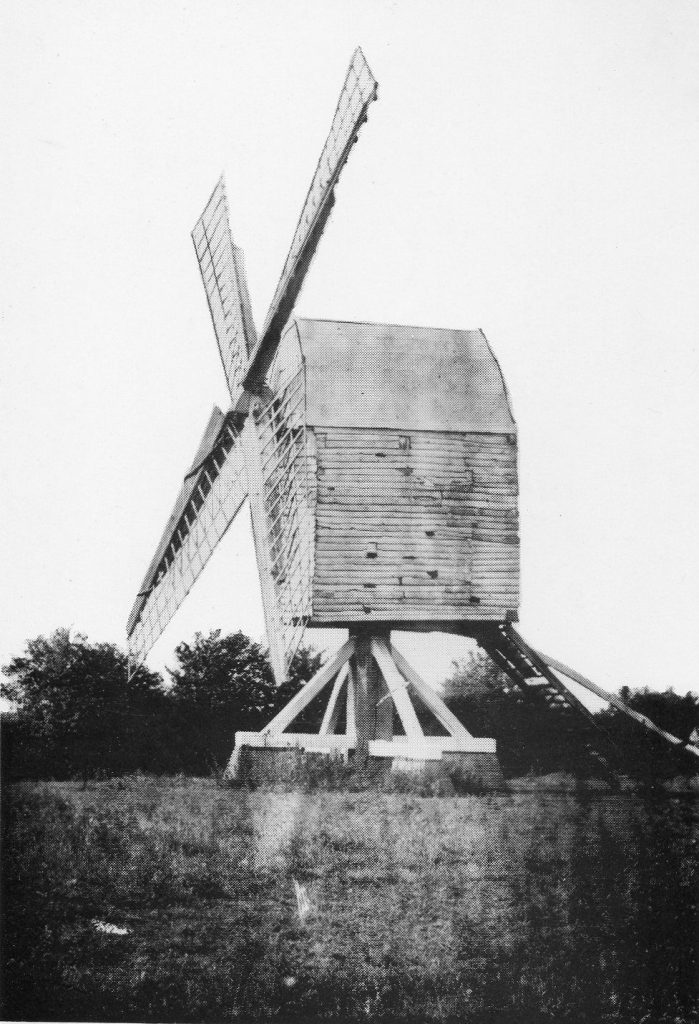 In response to the need to drain wetlands, the Dutch improved the design of post-mills with a hollow post under the body which contained the drive shaft. With this change  windmills used to pump water away to create reclaimed land (polders) were born. The so called Polder-mills.

The need for windmills continues to grow and therefore the structure had to adapt again. Around 1526, the hollow post-mill was replaced by an octagonal smock mill, referring to the blouses worn by farmers at that time. The smock mills were larger and stronger but more importantly, they made it possible to build permanent structures around the mill. And here is how slowly, the post-mills have turned into the tower mills of today.

The tower mills have several floors to store, to grind, and to live for the miller and his family. The most important improvement in addition to the walls is that the tower mills have a roof that can rotate depending on the wind. Thanks to this improvement, it is no longer necessary to turn the whole mill but only the roof. 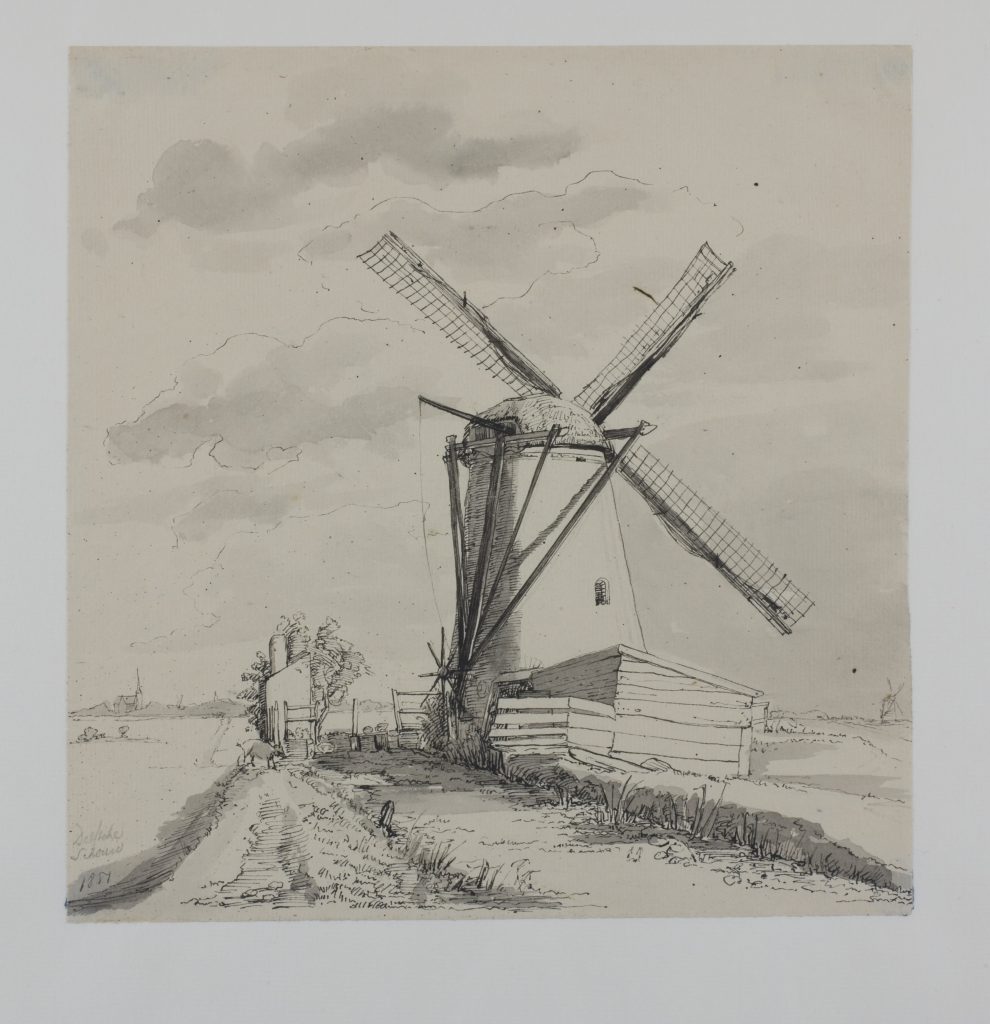 Drawing of a Tower mill

Nowadays, there is another type of windmill, the wind turbine. Modern wind turbines consist of three large blades at the top of a large pole. The wind turbine is used to transform wind energy into sustainable energy. And even though their looks and their purpose is completele different then the old school windmills, the Dutch continue to call them windmills.

Why can you find so many windmills in the Netherlands?

At one point in history there were about 10,000 windmills in the Netherlands.  Most windmills were clustered together in areas where land was reclaimed. In Kinderdijk there were 19 mills built around 1740. In the polder of Alblasserwaard, in the province of South Holland, there were about 270 windmills with multiple functions. In the area of the Zaanse Schans there were around 600 mills for industrial use. In the Beemster there were 49 poldermills.

The Netherlands and windmills is a perfect combination due to the flat countryside. The lack of coastal forests allowed stable and reliable winds and inventing the head of the mill can be turned 360 degrees mill could almost always be used. 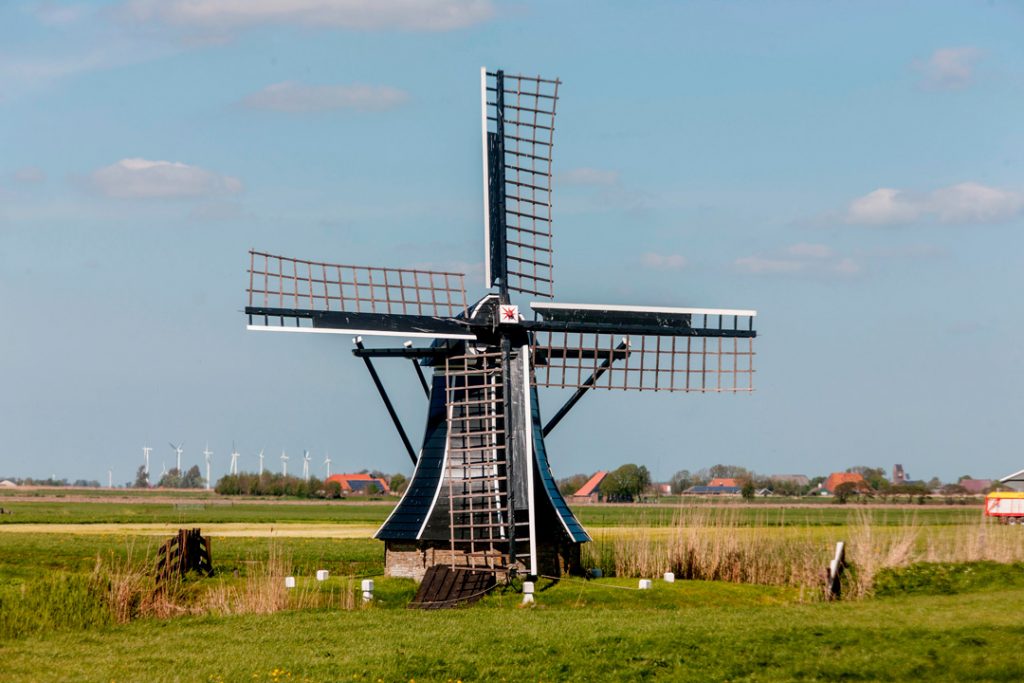 A small polder mill with modern style windturbines in the back

The decline of Windmills

With the Industrial Revolution and the discovery of the power of steam, windmills were slowly replaced by factories and steam pumping stations. In addition, many windmills were destroyed during the Second World War and many others fell apart by neglect.

Today there are about 1000 windmills in the Netherlands of which 397 polder mills and 594 for industrial purposes, of which the most are flour mills. Many of them are under the protection by the monument conservation foundation. Most of them only have a museum purpose, opening their doors for visitors.

The old fashioned windmills have been replaced by the modern style wind turbines generating electricity. There are currently 3000 in action generating 5% of Dutch electricity.

Where to see windmills

After reading this article, you would answer this question: “Everywhere”, and you would be right. You can see windmills in the Dutch landscapes everywhere, however, not everywhere windmill is open to visitors.

Some famous places like Zaanse Schans or Kinderdijk are open and welcome thousands of visitors daily. However, if you would like a more authentic experience we would advise you to visit a windmills outside of these two popular tourist attractions.

When coming to the Netherlands it will be hard not to see a windmill, as they are everywhere. Even in the cities of Amsterdam and Haarlem you will find windmills. But if you’re interested in visiting an authentic windmill, which is still open for production we would advise you to visit molen ‘t Lam in Woudsend. This windmill is included in some of our tours but when you travel to Friesland on your own, you are always welcome to visit miller Cees in his windmill. 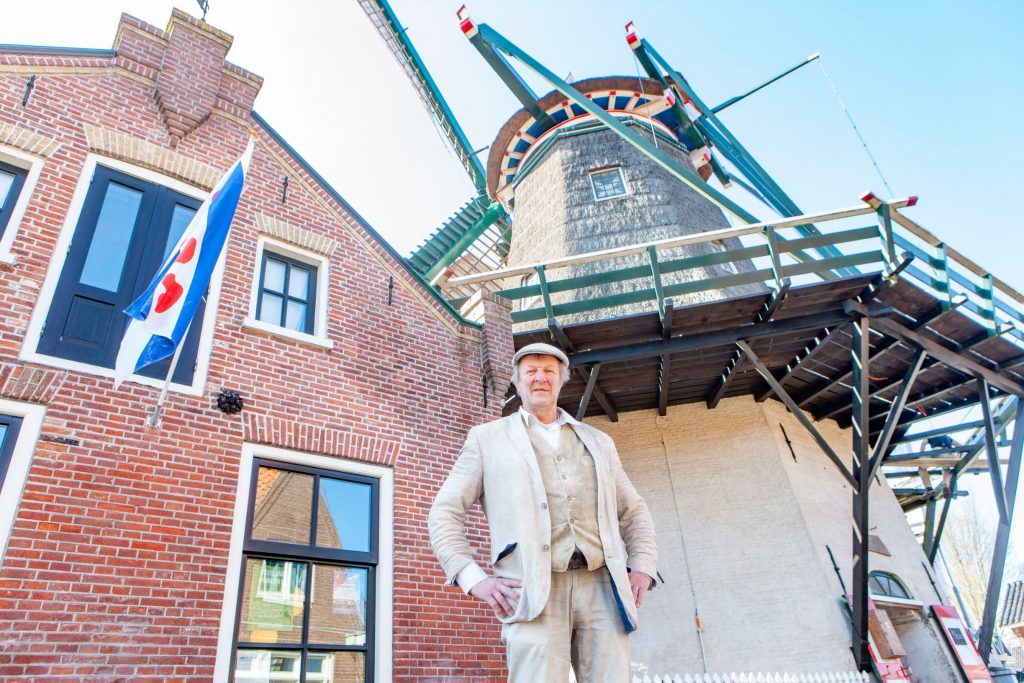 Cees and his windmill ‘t Lam in Woudsend 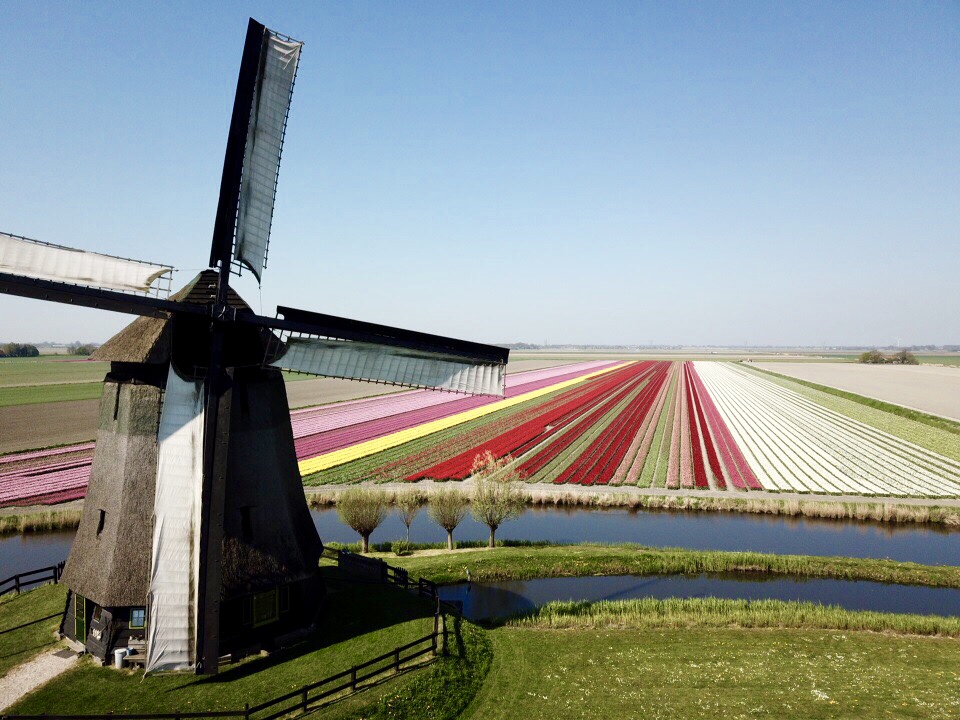